The Struggle Is Real… 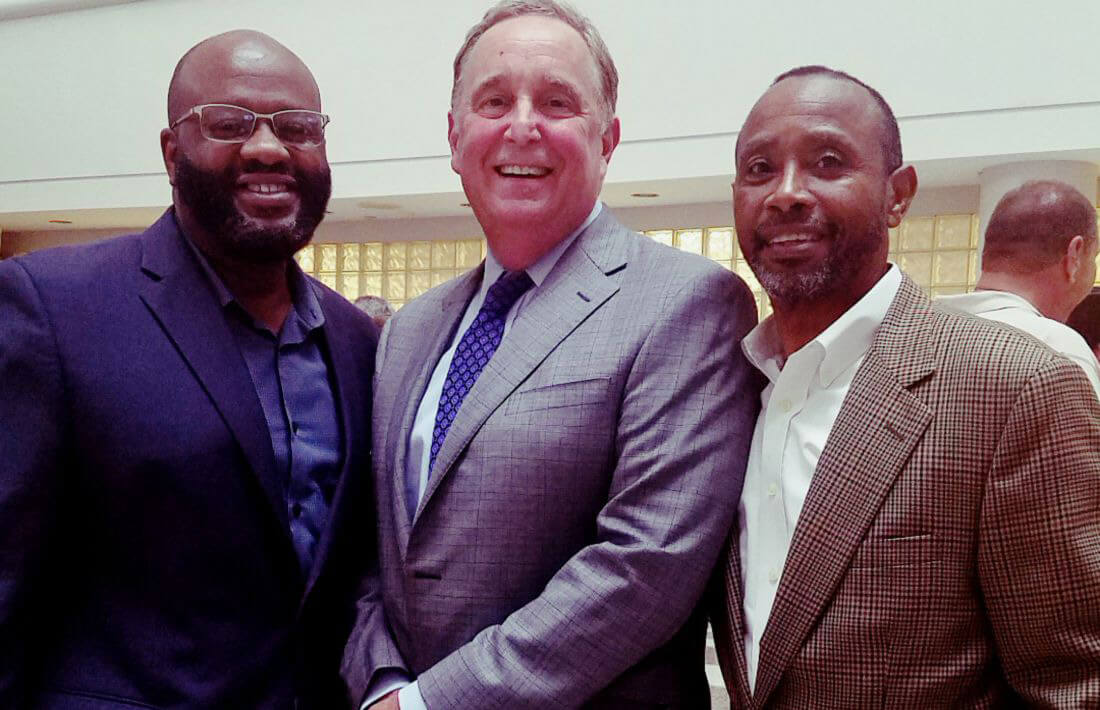 Abdul-Karim Ali is the Founder of AaliaNetwork, and Chief Relationship Officer of the Muslim Life Planning Institute, Robert G. Bennet MD is the President of Johns Hopkins Bayview Center, Earl El-Amin is the Resident Imam of the Muslim Community Cultural Center of Baltimore, Maryland. They each had skin in the game and were present in the room where it happened … the Hopkins Bayview Medical Center’s “Building Healthy Communities through Medical-Religious Partnerships” book publishing event on Wednesday, May 30. 2018.

He (Dr. Vieux Jr.) said, and I quote, “When I first heard your idea, I thought to myself that you have absolutely no chance”. He went on to say, “What your describing is like taking a bite out of an elephant. He asked with a smile, and do you know how long it will take to complete that meal?” Dr. Ulrick Vieux Jr., M.S. D.O., is adjunct professor at Touro College of Osteopathic Medicine Department of Psychiatry in New York City and guest presenter at the March 2018 Michigan State University Mental Health Conference, hosted by the International Institutes of Peace, Washington, DC. Psychologists, Social Scientists, Imams, Chaplains, and Leaders from multidisciplinary fields converged on the conference to weigh in on the theme “Out of The Shackles: The Pursuit of Civil Justice in The Face of Psychological Trauma.”

Dr. Vieux had just recently completed his presentation when a colleague and I sat down to chat about our professional challenges. I was struck by Dr. Vieux’s insistence that in order to cause systemic shifts in contemporary Islamic thinking, a new epistemology would need to come into existence that would lend to contemporary [21st century] conclusions. Rewind the tape to July 20, 2016, a day that will go down in the canons of Islamic thought leadership in public health, specifically organ donation/transplantation bioethics. The International Institute of Islamic Thought [IIIT] hosted its first Fiqh Forum entitled “Organ Donation in Islam: A Call to the American Muslim Community”. It was an effort, which sought multiple outcomes including consensus among scholars and medical professionals on the matter of permissibility and the rendering of public opinions on the matter.

Achieving these outcomes would bolster efforts to further inform and educate the general public, specifically, American Muslims within the United States. After lengthy conversations, debate and deliberation, the Fiqh Forum delegation concluded that notwithstanding certain caveats, organ donation/transplantation is permissible in Islam within the United States, and as such, is considered a perpetual gift given by one human being to another; in the Arabic language, it would be described as a sadaqah jaria [a perpetual charity]. Further, the clarity brought to the issue begins the long process of dispelling common misconceptions including body desecration and inordinate wait times for janaaza [Islamic burial] preparation.

The apparent consensus of the body politic buoyed hopes of organ transplant professionals in search of sound Islamic support from an esteemed national Muslim organization. This support would empower not only educational efforts, it will also inure an entire movement toward profound conversations to be had in Mosques and Islamic Centers throughout the country. Despite efforts to relegate this issue as too complex and controversial, the interest of the Muslim population is growing. Later in 2016, the President of IIIT addressed an audience at the Annual Islamic Society of North America conference in Redmond, Illinois. Abubaker Shingieti reported the good news that there would be a ruling on the matter in the near future.

To understand the analogy of the elephant as a meal we must begin with the story of the collaboration of the Washington Regional Transplant Community [WRTC] and the Aalia Network of Diversified Holdings, LLC [Aalia Network]. WRTC is an organ procurement organization [OPO] whose mission is to save lives by facilitating the proper care of donated organs and ensuring successful transplants to patients in need.

Aalia Network, a communications firm located in Washington, DC began assisting in WRTC’s efforts to reach the American Muslim community when they began to understand the data that demonstrated Muslims in America tend not to authorize organ donations at an alarming rate by comparison. In Northern Virginia during the years of 2012 – 2014 less than 5% of Muslim families approached for donation accepted to donate. With the Washington, DC area’s growing Muslim demographic, it was clear that the trends and the source of the challenge needed to be better understood.

Washington Regional Transplant Community reached out to Imam Johari Abdul Malik and Karim Ali to become bridges to the Muslim Community. Within the next two years, local Masaajid and Islamic centers began welcoming health information tables at Friday Jummah prayers, an initiative that has become known as donor information days [DID]. Other efforts included Arlington TV round table discussion on bioethics and transplants entitled “Arena”. Community leaders have begun to openly support the outreach efforts and the work has gained traction by consistently participating in the ISNA and ICNA conferences.

The Muslim Life Planning Network (MLPN), at its inception was an initiative created to assist in educating and increasing the American Muslim awareness and participation in organ and tissue donation. The initiative quickly became one of concern for the life journey of Muslims in America. The need for a robust educational support framework birthed the idea for the “Muslim Life Planning Institute (MLPI).

“We knew we would have to add to the conversation and work to make ours a better story on behalf of the communities we represent. Committing to all that is good is a part of our birth rite, and as well as an integral component of our existence here as Muslims in America” explained co-founder of MLPI, Samuel Shareef, donor father of Danielle Shareef. “We are committed to rolling up our sleeves and doing the work necessary to impact the masses of the people.” Danielle Shareef, daughter of Samuel and Gloria Shareef, affectionately known by close family as Dannie, was taken from this life ten years ago, however, not before giving the gift of life.

A week after completing her PhD studies in Education counseling at the University of New Orleans before transitioning this life. Danielle was a staunch advocate of youth empowerment through advanced education and competitive sports. She had played four years of high school, four years of college, and five years of professional basketball before returning to school to complete her graduate studies. Danielle’s organ donation provided three people a second chance to participate in and enjoy a healthier lifestyle. It was with this backdrop that Gloria, and Samuel Shareef found themselves in attendance at the Forum as guests of the Aalia Network. The all-day Forum ended without a consensus ruling, and without a clear understanding of what was to come next.

Given the commitment of time, resources, and the coordination that had been dedicated to the Fiqh Forum, many of the participants were left in a quandary. As thousands of Muslims wait in anticipation for a ruling from the preeminent North American Islamic authority. A very arduous waiting period, almost two years and running, yet, many families have been left with no clear direction regarding the complexities surrounding the permissibility of organ donation.

These complexities go well beyond checking a box at the local motor vehicle administration. Organ donation is an industry, with strict regulations, state laws governing many aspects of our choices as donors. For example, many people are not familiar with specific authorizations of organs; many don’t know or understand the actual process, which occurs once the deceased organs are recovered. Understanding these issues provide the best opportunity for informed choices. MLPI believes that having an estate plan including a Last Will and Testament, Power of Attorney, and Living Will/Health Care Directive is one of the most viable options for Muslims today.

The challenge, however, is exacerbated with the stories of families who are faced with the gut-wrenching reality of a loved one passing from this earth. On two occasions, specifically in the fall of 2017 and again the winter of 2018, Life Link contacted Muslim Life Planning; a Georgia-based Organ Procurement Organization [OPO] for assistance. OPO family services personnel are trained to speak with families regarding donations.

Of the two cases mentioned, in one the practitioner was met with objections from a local Imam. The father of the deceased challenged this personal position taken by the Imam. Muslim Life Planning personnel worked late into the night arranging the communication between the local Imam, and an Imam trained in Bioethics and genetics, whose efforts helped spark the 2016 Fiqh Forum conversation. In the second instance, the family opted not to allow for transplantation sighting it was against their religion. In spite of this fact, Muslim Life Planning provided toolkit information and links to video commentary to prepare the family services team member some context and understanding to empower his conversation.

Each year since the 2016 Fiqh Forum, MLPI and the Washington Regional Transplant Community has experienced growth in their outreach initiative. In 2017, WRTC was asked to participate in a study conducted by the University of Chicago entitled I Am a Living Donor [IamLD]. This study will seek to uncover the current attitudes of Muslims regarding organ donation and through academic intervention, seek to shift those attitudes over time. The study will be conducted over a period of three years and while the study and findings will be useful, countless Muslims remain on transplant lists or on dialysis in communities that do little or nothing to support their health realities.

Spreading the word in 2018 has taken MLPI and WRTC to the campus of Yale University where the Association of Muslim Chaplains [AMC] held their 8th Annual In-Service & Shura conference hosting Imams and Chaplains from across the United States. MLPI invited several national leaders in the health space of organ donation and mental health.

Among those participants were representatives from Eversight, an international Eye-Bank responsible for establishing eye banks in developing Muslim international regions, Henry Ford Hospital Transplant Coordinator, and a licensed State Psychotherapist from Washington DC. The roundtable discussion was attended by the President of the AMC.

It is with this commitment that we share and continue moving forward with this most important work. We would like your feedback on this issue. Are you currently a registered organ donor? What are your thoughts concerning its permissibility in Islam? If you needed a lifesaving organ, would you accept it?